Invisible Women in the German Asylum-System

This interview was originally published in March 2021 in Graswurzelrevolution under the title "Zwischen Abschiebung und missbräuchlichen Beziehungen".

Grace is an activist from Women in Exile & Friends, a self-organized refugee-group based in Brandenburg and Berlin. I talked with her about women in Kenya, refugee women, and the German Asylum system from a feminist perspective. 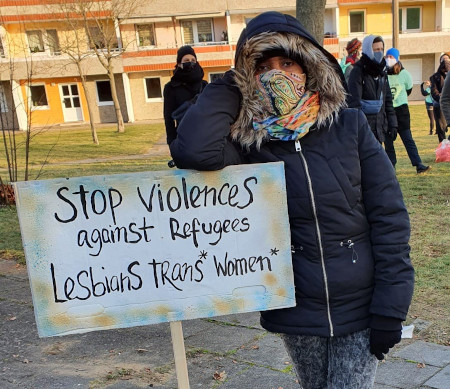 Grace, can you tell me a bit more about the activities of Women in Exile?

Women in Exile & Friends is a group of people who identify as women* and are either refugees or their supporters. We visit women in refugee camps in Brandenburg and provide them with legal and health information. We organized two bus tours to visit camps all over Germany. In addition, we organize protests against racism and for women’s and refugee’s rights, workshops, conferences, and festivals. We recently published a discrimination-free health magazine in multiple languages which is available on our website. For the 8th of March, we mobilize for a protest in Cottbus.

Why is it important to be self-organized as refugees and why is it good to have a women*-only organization?

When founding Women in Exile in 2002 the idea was to give refugee women a platform to talk about their struggles. We felt like our issues did not get enough space. The world – and most refugee organizations – are dominated by men. When reporting about refugees, media often shows males even though 42% of all asylum seekers were female in Germany 2020. We are self-organized because we are fully capable of helping ourselves – even though refugee women are often portrayed as passive victims being dragged along by men. We know best about our situation and our needs.

You were born and raised in Kenya. Can you tell us a bit about the situation of women in Kenya?

According to the 2010 constitution, women have the same rights as men. However, in reality, women are still disadvantaged as the idea of equal rights and equal opportunities has not spread through all parts of the country and societal norms. Kenya is also very corrupt, which makes it even more difficult for women to fight for their rights. In some tribes, women have to dig small holes in the ground and sit over them during their period. 10% of girls miss school during their periods because they don’t have access to sanitary products. Also arranged marriages and FGM are still practiced in some parts of Kenya even if it’s illegal. According to a human rights report from 2018 45% of Kenyan women and girls aged 15-49 have experienced physical violence and 14% sexual violence. On top of that, victim-blaming is common. Also, child trafficking is a problem in Kenya. If you don’t watch your child closely, it might get stolen.

While Kenya is considered one of the wealthier countries in east Africa, 36% (2015) of Kenyans live below the poverty line. I know unmarried women who left their children with relatives and went to Europe in the desperate hope that they will find work there to provide for their children back home. During Corona, prices for food in the cities further rose and the poor rather die of hunger than of Corona. Only 1% of Kenyan women own property and divorced or widowed women are sometimes left with no property of their own. Historically, women’s right on land was eroded during British colonialism and the capitalization of land.

How is the LGBTIQ*-Community in Kenya?

It exists, but life is difficult for them. According to the 2010 constitution, all people have the same dignity and rights. However, there is still an old law that was brought by British colonists and punishes non-heteronormative sex with up to 14 years of prison. This law is not often enforced but it is, nevertheless, a basis for discrimination, hostility, and harassment. You rarely see any LGBT people. They mostly hide. In 2019 a petition to abandon this law was rejected. Nowadays people who fight for keeping the law argue that it’s an important part of African tradition. When President Obama visited Kenya in 2015 he spoke strongly against the discrimination of homosexuals but the Kenyan President refused to act on that. Homosexual marriage is illegal too.

Trying to reach Europe can be very dangerous. How is this experience different for refugee women?

2019 there were reports of rape, forced prostitution, torture, and slave auctions in EU-funded refugee camps in Libya. Other camps aren’t safe either. You’ve probably heard of missing food, water, housing, sanitation facilities, and health care. This is especially difficult for pregnant women. In war zones, women need to fear sexual violence, which is often part of the military strategy. It’s horrible that women and children are not protected from violence when fleeing in order to find safer spaces and that the EU knowingly accepts that.

“No camps for women* and children” is one of the slogans of Women in Exile. In which ways are camps especially harmful to women and children?

There are many horrible things to tell about refugee camps in Germany. People who have never been there often find this difficult to imagine, also because there is hardly any media coverage about this. In 2019 Rita, one of our sisters, living in the refugee camp Hohenleipisch was brutally murdered. After she was reported missing the police took two months until finally thoroughly searching the area around the camp where her corpse was found. Why was this case no priority? This is one more argument against camps in the middle of the forest and camps in general. In some camps, there are houses especially for women and children (“Schutzhaus”) with security guards in front of them. However, being locked in a prison inside of a prison is not the solution. There have been cases of sexual harassment in which the women have later been blamed for having left the “Schutzhaus”. Camps are sometimes managed by private corporations. When visiting one of those camps we heard that leaders of the camp used racist insults towards refugee children.

There is a lack of privacy, constant catcalling, the fear of going alone to shared bathrooms, and a lack of space to play for children. In one camp the refugees had to be quarantined due to Corona cases. As they could not go to the supermarket themselves, they got copied lists for things they need. The lists had food and other daily necessities on them but tampons or other female sanitation products were forgotten. Most refugees are not to allowed to work while they are in the camps. The women who are allowed to work are often asked to clean the camp. They get only 0.8-1€ per hour and might face penalties if they refuse these jobs. Others try to work in double invisible jobs: off the record work in the care sector.

Often, there is also a lack of legal advice in the camps. Inmates live in constant fear of deportation. The police come during the night to search for those they want to deport which results in many sleepless nights. All this stress in addition to traumas refugees often bring from their countries of origin can lead to depression, suicides, more aggression towards women, and health issues. Some refugees are forced to ask their social services department for allowance to see doctors, which can be especially intimidating for refugee women who have male caseworkers and women-specific health issues. We also know of one case in which a doctor suggested removing the uterus and later another doctor found that this was not needed at all.

Women in Exile writes on their website that every woman seeking asylum in Europe has a “legitimate reason”. Since 2005 gender-specific prosecution is accepted as a reason for being accepted as a refugee in Germany. From what you’ve heard from other refugees, do women really get residence permits in those cases?

I know of only one case. You need to be lucky.

The goal of the Istanbul Convention is to prevent and combat violence against women and domestic violence. It was signed by Germany in 2011 and put into effect in 2018. However, Germany stated reservations against article 59 which allows women whose residence status depends on a marriage an autonomous residence permit if they experienced violence in the relationship and thus separated from the spouse.

So women are forced to decide between deportation and abusive relationships.

Which reasons are accepted and which not is a political decision and those decisions are often based on economic or diplomatic interests. So how do you get a residence permit if the real reasons are not accepted?

Countries considered safe by Germany, might not be safe for everyone, especially not for women. When seeking asylum, you really have to know your rights and fight for them. It’s best to be organized in a group like Women in Exile so that you can share experiences and support each other.

If refugee women are allowed to stay, how is life in Germany?

It’s difficult as your chances depend on learning the language. They call it integration but isn’t it another form of colonialization? Refugee women often end up working in the care sector and earn less money than male refugees. In the book “In our own words”, which was published by the International Women Space, one woman who came on her own to Germany says that people in Germany assume a man must have paid for her flight to Germany and – when dating – men ask her if she is only interested in getting married in order to get a residence permit. Those are just some of the daily micro-aggressions you have to deal with as a black woman in Germany.

Some studies show that remittances (money sent back to the countries of origin) are very effective in supporting the countries of origin. In contrast to “Entwicklungshilfe”, this money is not lost in corruption but gets directly to the people. Especially remittances sent by women are very reliable. Migration also has the advantage of bidirectional knowledge transfer. The climate crisis could lead to a further rise of nationalist thinking and barbarism. Some people say opening borders is the best answer to both problems. What’s your opinion on that?

When you have to fear being deported every day, you don’t really worry about climate change. However, I agree, there are connections. Migration due to climate change might increase and it should not be illegalized. Migration will happen no matter which measures will be built against it. Informing about inhuman conditions in countries of origin and in refugee camps, undermining borders, and creating networks could be some measures to guard against barbarism. In this context, it becomes even more important to build bridges between various activist groups and not only fight racism but also show the advantages of cooperation between groups of diverse experiences, identities, and origins. 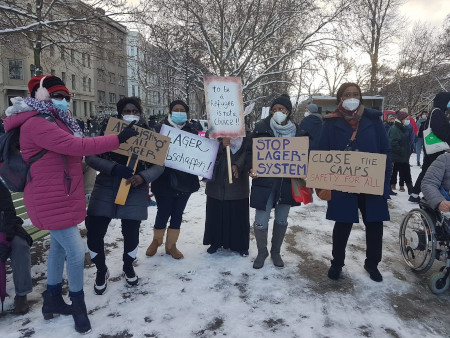 I think Women in Exile does very important work. Are there similar self-organized refugee women groups in Germany and is there a way they can be supported?

Yes, there are other groups: FLIT Solidarity Africa in Munich, International Women Space in Berlin, “Frauen in Aktion” in Göttingen, NINA in Hamburg, and many more. There are diverse ways in which you can support us. You can come to our protests, help us organize workshops, conferences, and information campaigns, or support us in our daily struggle with German bureaucracy. Just get in contact and become a supporter, ally, or friend.

Thank you for your time, Grace.