Some newer ideas about transformation and utopia can be found in this text: Planetare Kooperation (German)

Transformation into Free and Solidary Societies

This is a snapshot of a living document that is updated on this page.

More and more people become aware of the fact that the way we are currently living is shitty, unjust, and unsustainable and that things need to change. This text first describes various problems with most of the existing societies on earth. After that, utopian sounding but realistic concepts of non-shitty free and solidary societies are described. And the last parts of the text describes how to get there. Let's go.

The root cause of many of these problems is the capitalistic system which dominates production, resource distribution, and political decisions in many societies. The capitalistic system is built on the idea that everything can be valued with money, exclusion from resources and endless expansion, which results in injustice, resource exploitation, and crisis.

Goal: A world of Free and Solidary Societies

After describing the huge issues of existing systems, this part describes how people can live together in free and solidary societies. There is an alternative to the existing systems that is worth striving for.

This is not one idea, pattern or blueprint of free and solidary societies, but rather a framework, in which multiple diverse ideas of living together and organizing can co-exist. This concept is not trying to force moral standards of how people should live (e.g. only in small communities or with only very reduced technological tools).

The main requirements are freedom and solidarity. The points below make those words more concrete:

This is the basic framework that hopefully many people can agree on and that gives them enough flexibility to implement their own ideas of how they want to live within this framework.

People continue living where and how they want. Instead of voting for a party that will make decisions, those who want to take part in decisions get organized (by going to meetings or in online communication) in various groups or send someone they trust to those groups:

(See this text (German) for a more practical example of this organization.)

Coordination committees are responsible for a specific local area. There are also regional, mega-regional, continental, and planetary coordination committees that represent committees federated in the areas they include. These non-local committees discuss resources like specialized production (that require non-local high-tech like internet exchange points), specialized health care, specialized education, and long distance transport and other questions about natural resource consumption, environmental pollution, ... that concern more than local people. Everyone who is interested can be part of those committees and take part in online decision making. For practical reasons, local committees might name a few people with imperative mandates for those non-local committees. Imperative mandate means that they get told by the committee that named them how to participate in decisions and if they don't act accordingly, they can be revoked immediately. Thus the power stays decentral and local, always focused on the needs of the people while still being able to make decisions globally. 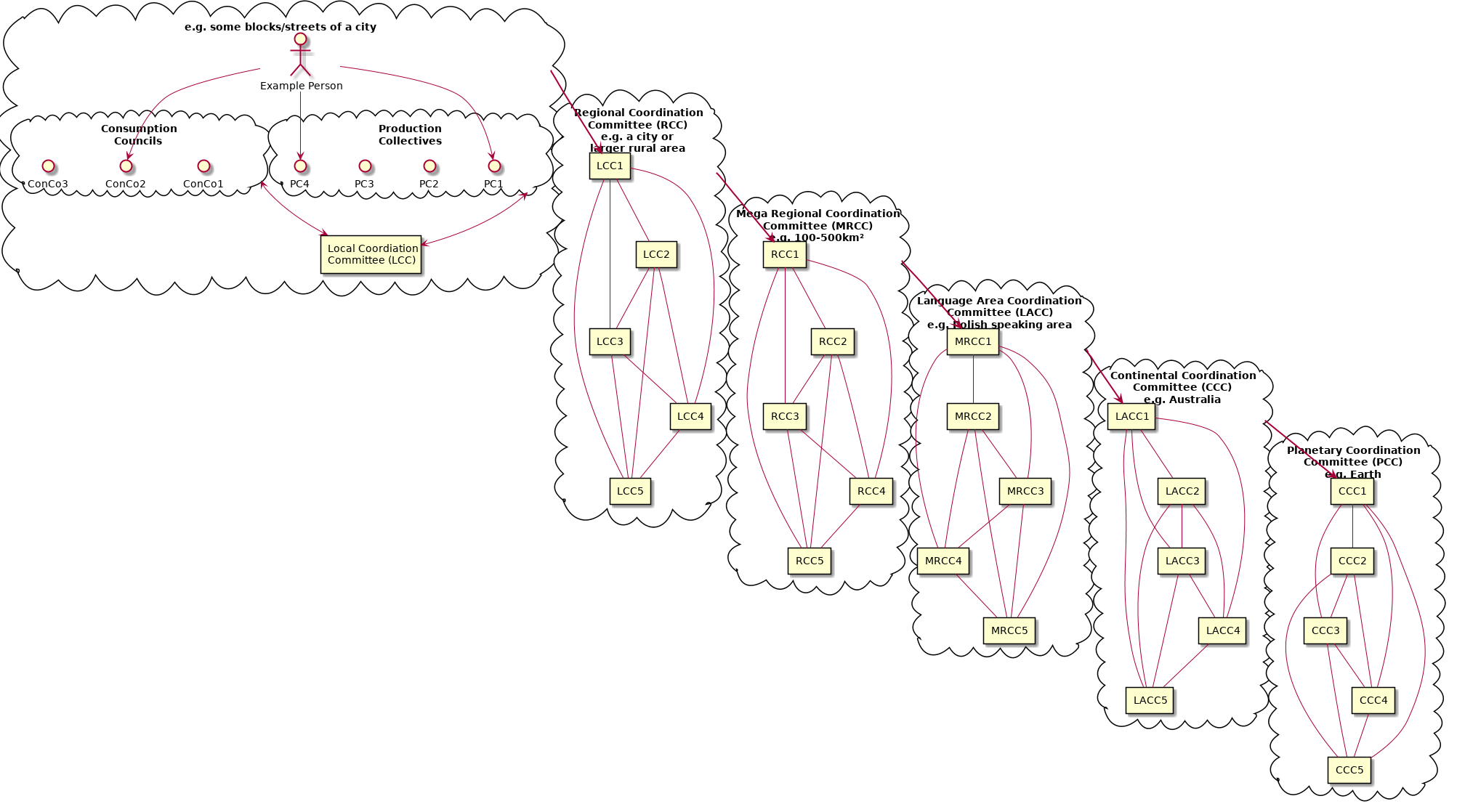 Basic needs like food, water, electricity, public transport, homes, education, health care, ... will be made available for everyone for free without having to explicitly communicate them. So no one has to be involved in organizing, councils, collectives, and committees if they don't want to. From time to time and depending on their abilities they should, however, contribute to work required in their area. People who refuse to contribute over a longer period of time without understandable reason might be asked to leave consumption communities after some time. They can try to find other communities or live on their own.

Special needs of individuals (like high-tech science equipment needed for their personal interest experiments) or consumption communities (like huge amounts of cars) that are not covered by the basic need goods that are provided for, will require the consent of those that are concerned by those decisions. E.g. if more than the allowed scare resources will be consumed by the need, they might have to find a way to save those resources somewhere else and if more work is required, they will have to find people willing to do that work or do it themselves.

There are no money, no government, and no borders.

Transformation: How to get there

The goal of free and solidary communities has to be present in the ways that are chosen to get to this goal. This means that exclusionist approaches as propagated by right-wing parties are not acceptable. Also, transformation ideas involving centralized planning and leadership are not compatible with the goal.

The idea of transformation via reforms implemented by the government sounds unrealistic because the goal is a society without government and the government will probably not be willing to remove itself. Some social improvements can be reached with reforms, system change probably not.

A forceful and violent revolution sounds unrealistic too for multiple reasons:

Thus, for a successful transformation, a huge majority of people need to agree with the goal of the transformation. This will hopefully prevent the government from using violence against the movement. Also, people must be and feel prepared for the transformation, which means that they should be able to experience small working examples of free societies within the old society so that they can also learn new abilities required for free and solidary societies like communicating needs, making decisions, organizing with others, and solving conflicts.

A successful transformation can happen by first establishing small seed projects that implement parts of the features of free and solidary societies and fulfill needs that the existing capitalistic society fails to fulfill. E.g. production collectives, house projects, give away shops, free food, free digital goods, sharing resources with neighbors, solidary support networks, ... With these projects, abilities and ideas can spread and slowly create a structure parallel to the existing state. After some time this new structure will become dominant and the old state-based society ceases to exist.

Aren't we building those seed projects for years now and they never developed into more than small islands?

First, there are examples of grassroot movements (small seed projects that grow into a social movement) that did result in some form of system change: citizens of East Germany organized protests and direct actions which resulted in the fall of the Berlin Wall. Worker unions organizing people and general strikes resulted in "The Short Summer of Anarchy" (a free and solidary society) 1936-1939 in Spain.

Second, the projects existing today are very diverse and unconnected, often only integrated in left subculture scenes. They are often focused on their own survival within existing systems and involved in detailed political discussions with each other. If those projects agree on a framework for a goal and how to get there which still leaves every group and individual enough space for their own ideas and their own vision of free and solidary societies as described above, the chances of having a transforming impact increase.

What about those who don't want change and are comfortable in the current situation?

As the consequences of climate change become more obvious and other economic crisis hit societies, more and more people will understand that something has to change and that they need to change their way of living as well. There are in fact a lot of people who are already convinced that something needs to change. However, as they don't know about good alternatives to the existing society and how to get there, they tend to turn to right-wing populists or resignation and cynism instead. And for those people who like to rule or be ruled for some reason, they can still do that within the framework of free and solidary societies if they keep to themselves and don't limit the freedom of those who don't want to be involved.

What about right-wing movements?

Right-wing movements are racist, elitist, sexist, and exclusionary (they might only tick some of those boxes) and thus not compatible with free and solidary societies. Those movements need to be exposed for what they are. And additionally, the concepts of free and solidary societies need to be presented in ways that make them more appealing and more useful than right-wing ideas. If there is a plausible concept of how to share scarce resources, the need for exclusion and hate diminishes.

Summary - How can Transformation happen

The seed level can get more traction and become dominant by (some ideas just to show that there are many ways):

How do we Start?

Flow through a Transformation Process

This text is influenced by: